Gutsy Women Explorers Who Made History 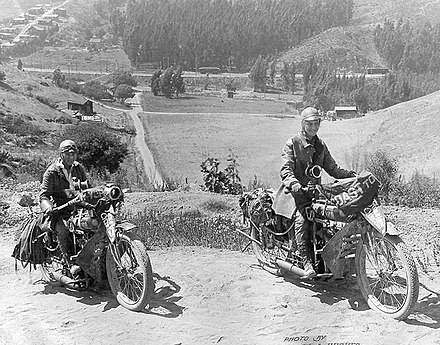 History is full of brave, independent, and curious women who broke barriers and challenged the norms of the day through travel.  Not all of them are well-known, and many avoided the spotlight, preferring to quietly defy convention and offer inspiration to women worldwide. All are pioneers and role models for today’s intrepid female explorers. Here are seven you might not know.

Augusta Van Buren (1884-1959)
You’ve heard of Thelma and Louise, now meet Augusta and Adeline Van Buren, the first women to ride motorcycles solo across the continental US.  In 1916, the pair covered 5,500 miles on bikes in just 60 days. Augusta then went on to join Amelia Earhart’s Ninety-Nines group of women pilots.

Jeanne Baret (1740-1807)
Beret is recognized as the first woman to circumnavigate the globe. During the 18th century, the French Navy prohibited women on ships, but that didn’t stop her. Jeanne donned her disguise, changed her name to Jean, and enlisted on the world expedition of Admiral Louis-Antoine de Bourgainville. Working as a valet and assistant to naturalist Philibert Commerçon, Jeanne sailed with 300 men and managed to avoid detection, at least for a while. Expedition accounts varied about when the crew discovered her secret, but it didn’t matter, Jeanne had circled the world.

Isabella Bird (1831-1904)
An explorer, writer, and naturalist, Isabella overcame illness and the limitations on women in the 19th century to see the world. She left home at the age of 41 and didn’t return until 31 years later. During that time, she visited America, India, Kurdistan, the Persian Gulf, Iran, Tibet, Malaysia, Korea, Japan, and China.

Annie Smith Peck (1850-1935)
A trailblazer, mountaineer, and scholar, Annie Smith Peck spent her life writing and speaking about her mountain climbing adventures to encourage others to travel and explore.  Annie set records climbing mountains and annoyed many people by climbing those mountains in pants rather than a skirt. The north peak of Huascarán in Peru is named in her honor. She was admitted to the Royal Geographical Society and was a founding member of the American Alpine Club. Annie bagged her last peak at the age of 82, the 5,367ft Mount Madison in New Hampshire. Gertrude Bell (1868 – 1926)
A woman of amazing talent and a lifetime of firsts, Gertrude was an archaeologist, linguist, British military intelligence officer, and one of the greatest mountaineers of her age. She explored and mapped Greater Syria, Mesopotamia, Asia Minor, and Arabia.

Mary Seacole (1805-1881)
A British-Jamaican nurse who tended cholera victims in Panama and treated soldiers on the Crimean War’s front lines, Mary believed travel was a necessary lifetime pursuit and an antidote to the stuffy and restrictive Victorian era. One of two known photographs of Mary Seacole, taken for a carte de visite by Maull & Company in London (c. 1873)

Emma Gatewood (1887-1873)
At a time in life when many women start to slow down, 67-year-old Emma was just getting started. The first woman to through-hike the Appalachian Trail alone, this great-grandmother went on the conquer the trail two more times and completed the 2,000 Oregon Trail. Her simple advice for hiking and living, “pick up your feet.” You might also like: Ten Tips for Uncovering Your Irish Heritage
Nine Questions to Consider When Planning a Trip to Africa