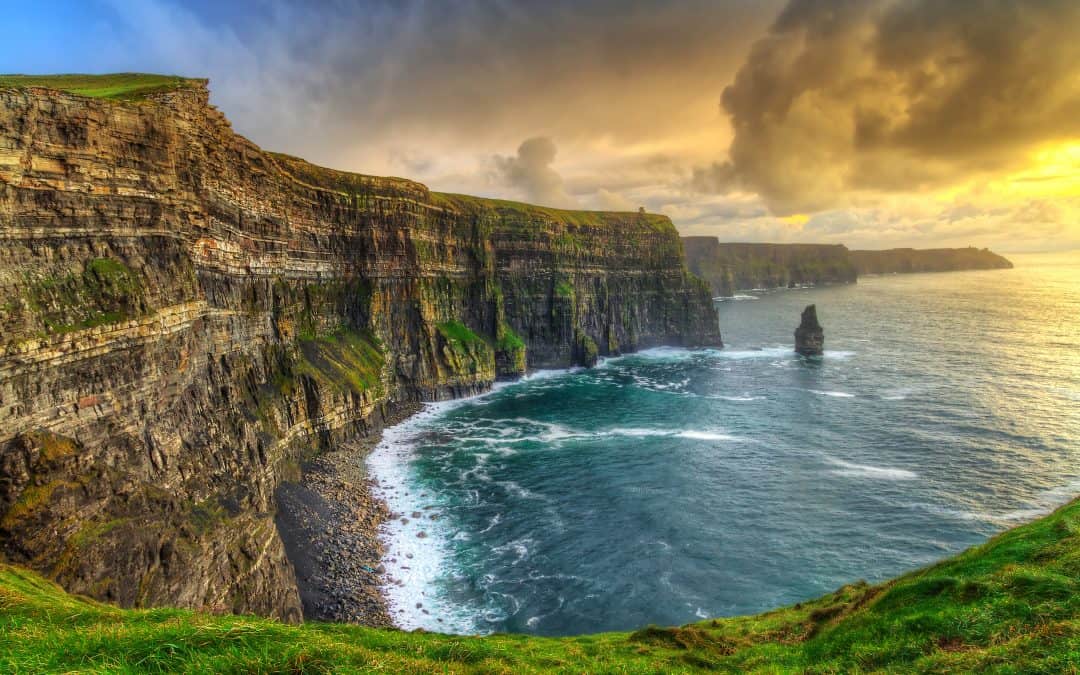 I love Ireland, the people, scenery, music, and food and drink are wonderful. Not surprisingly, it’s the most popular European destination for Americans. Many Americans visit to explore their genealogy, while others just want to have fun. Either way, it’s a great first trip to Europe with a 6-hour flight from the East Coast, a common language, and the ability to clear customs before leaving the country and heading home.

If you find yourself across the pond, here is my top 10 list of natural wonders in Ireland. I recommend you rent a car to see them. If so, you might need this post about driving in Ireland.

Caused by a volcanic eruption 60 million years ago, this geological wonder consists of 40,000 interlocking basalt columns and is rich in mythology. Legend has it that these columns are the remains of a causeway built by the giant Finn McCool to cross the sea to Scotland to confront a rival giant. This UNESCO World Heritage site is located on the Antrim coast in Northern Ireland.

While you are in the neighborhood, make sure to visit the Carrick-a-Rede rope bridge nearby. Fishermen used the rope bridge to cross from the cliffs to a rocky island 65 feet away from where they kept boats and salmon nets. If you have a fear of heights, don’t look down; it’s a 75-foot drop to the sea.

Insider Tip: Like a lot of popular tourist attractions, buses start to roll into the Giant’s Causeway around mid-day. Try to get there early for a more private and relaxed visit.

Made famous by the Star Wars films The Force Awakens and The Last Jedi, Skellig Michael is one of two towering rock points that rise out of the sea twelve kilometers off Valentia Island in County Kerry. Between the sixth and eighth centuries, a small group of monks created a monastic community here and the beehive huts, grave slabs and crosses of the settlement remain.

Skellig Michael is a 45-minute boat ride from shore and followed by a 650 step climb to the monastic settlement. Small Skellig, the second peak, is inaccessible to man but serves as the home of the second largest colony of Gannets (seabirds) in the world. Travel to Skellig Michael is by small boat and is weather dependent.

Insider Tip: The government of Ireland gives a limited number of permits to visit the island. If Skellig Michael is a must-see, you should plan to book a tour at least a year in advance.

The Cliffs of Moher in County Clare are on everybody’s Bucket List for Ireland, and for a good reason. The cliffs stretch for 5 miles (as the crow flies) and rise 702 feet above the sea. It’s one of the most visited sites in Ireland, yet it remains unspoiled.  But be careful: you can creep right up to the edge of the cliffs, and on a windy day, you could literally be swept away by the view.

Insider Tip: If you’re in good shape and don’t mind heights consider hiking in from the small fishing village of Doolin. You enter the trail by climbing over a fence with a small sign reminding you to be careful because cliffs are dangerous (the difference between the U.S. and Europe). Wear good, hearty shoes and pack a raincoat because you’ll get wet and muddy on your 2-hour hike. Trust me; it’s worth every step. You’ll see views tourists on the buses can only dream about. Remember there are hot drinks and rest at the visitor’s center.

Insider Tip #2: A shuttle bus back to Doolin runs periodically during the day (although you might have to wait). Ask the visitor’s desk for the schedule and pick-up spot.

Insider Tip #3: Don’t bother with climbing O’Brien’s tower on site; you are already 702 feet above the sea, and another 10 feet (and spending 2 euro) will not make a difference.

Insider Tip #4: If you don’t hike in, try to get there in the late afternoon. The sun is on its way down, and it makes for some fantastic photos.

The largest cliffs in Europe, these cliffs are off the beaten track in County Donegal in the Northwest of Ireland. They are just as spectacular as the Cliffs of Moher but much less touristy.

Insider Tip: Keep driving north into Northern Ireland (or North of Ireland, depending on who you ask). Fans of the TV show Games of Thrones will enjoy visiting some favorite spots from the kingdom of Westeros.

Insider Tip #2: Keep going and make time to visit Belfast. Since the end of the “Troubles,” the City has worked hard to encourage tourism by building beautiful new hotels, attracting world-class chefs, and opening the Titanic museum. If you’re interested in Irish history, take a “taxi tour” around the Protestant and Catholic areas. The drivers are locals with family ties to both sides of the conflict. It’s heartbreaking but also worth your time.

Most of the tourists’ flock to the Ring of Kerry. Instead of the 120 miles of the Ring of Kerry, consider the more manageable 30 miles of the Dingle Peninsula. You can travel by car or bicycle. Make your way from Dingle Town to Slea Head at the tip of the peninsula, and you will understand why they call County Kerry “God’s Country.”

Insider Tip: If you feel brave, leave the Peninsula by the Conor Pass. The views are amazing, and the road is terrifying. Beware of tour buses and give way in the most narrow spots.

Insider Tip 2: While in Dingle Town, take the Dingle Harbor boat tour to see Fungie the dolphin, who lives in the harbor. Some tours will not charge you unless you see the 13-foot bottlenose dolphin.

Located on the face of a cliff in the Glencar Valley in County Sligo, at 492 feet this is Ireland’s tallest waterfall. Its Irish name means “stream against the height,” which denotes the fact that when the wind blows from the South, the water flows upward and back over the cliff!  It’s a nice 1.2 km walk with scenic views of the valley.

Insider Tip: While you are in the neighborhood, why not visit Glencar Waterfall and have a picnic at nearby Glencar Lough (Lake), which has a tea room, bathroom facilities and a playground for the kids.

If you are in the Dublin area and want to see some spectacular mountain scenery, take a trip south towards the town of Laragh over the Sally Gap in County Wicklow. Once you reach Laragh, have a cup of tea and a sweet at the Glendalough Green Café. If you have time, spend a few hours at Glendalough, one of the most impressive (and beautiful) monastic settlements in Ireland. Then make your way over the Wicklow Gap towards the town of Hollywood and back to Dublin to finish your day.

This giant rock formation in County Sligo was formed during the last Ice Age. Originally a vast plateau, the glaciers carved it into what it is today. The North Face is a challenging climb, so the best way to approach the summit is from a walking trail on the South side. Once you reach the summit, you will have beautiful views of the coastal plain of North County Sligo and the Atlantic Ocean.

Don’t be fooled by the barren limestone landscape; the Burren in County Clare is full of flora, fauna, and even a few caves. I recommend a guided tour, which will bring this desolate landscape to life with information on its geology, history, wildlife, and flora. The Burren is unique in that it supports arctic, alpine, and Mediterranean plants side by side.  It also contains more than 90 megalithic sites and several ringforts used between the 9th and 12th centuries.

Insider Tip: One of the top Neolithic sites to see in the Burren is the Poulnabrone Dolmen, a 6,000-year-old portal tomb. When it was built, the wheel had not been invented, yet the builders could hoist a 12,000-pound stone 6 feet to cap the monument.

Insider Tip 2: If you drive, you’ll see all sorts of small road signs marking interesting places to stop. Make sure to stop even it looks like nothing is there. You’ll find some fantastic things hidden a short distance from the road.

Located between the MacGillycuddy Reeks and the Purple Mountain near Killarney in County Kerry, the Gap of Dunloe is a magnificent mountain pass about 7 miles long. Within it are five lakes, connected by the River Loe, and between the first two lakes is the arched “Wishing Bridge.” Legend says if you make a wish made from the bridge, it is destined to come true. A car can traverse the narrow road, but many prefer to take their time and go by bike, trap (horse cart), pony or on foot.

Insider Tip: If you hike the Gap, leave early from Kate Kearney’s Cottage, and you’ll have the road mostly to yourself. The hike takes at least 2 hours on narrow roads with a few steep hills. The hike ends at Lord Brandon’s Cottage where you’ll find a boat back to Killarney National Park (eventually). Boats bring tourists from the park, so you’ll have to wait until one arrives. It takes some effort, but if you’re fit enough to make the journey, the Gap of Dunloe is magical and well worth the effort.