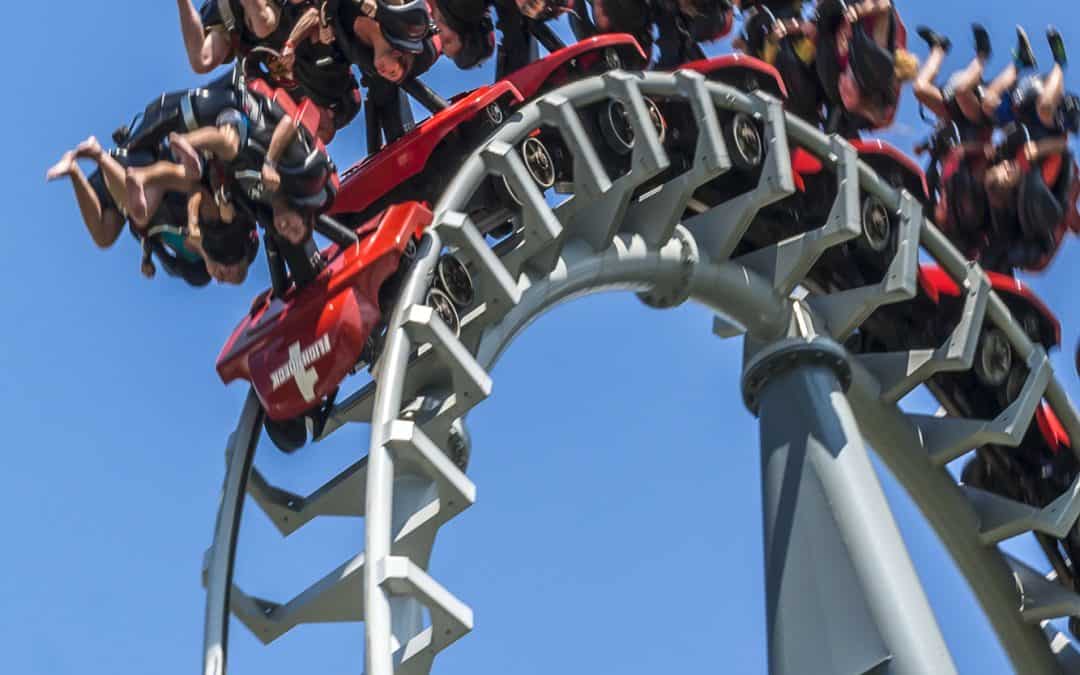 Tis the season…for family vacations. For many families, vacation equals amusement parks and lots of rides (December is the busiest month for Disney World and Universal Studios). Great for kids, but not so great for many adults.

For most of my life, I’ve loved roller coasters. Not the crazy spinning rides, just the steep, steep climbs and plunge that sends you airborne, held in the seat by a thin metal bar or ragged piece of cloth.

In what has to be the greatest “I am getting older” indignity of all time, I now get motion sickness.

So, imagine my concern when we decided to take our kids to Universal Studios in Florida.  I was thrilled and worried all at the same time.

Thrilled, because I LOVE Harry Potter (confession, Neville Longbottom is my favorite), and I want to fly off with him and the gang on my Nimbus 2000.  Concerned, because getting sick on The Forbidden Journey would be hugely embarrassing and pretty gross.

Besides, I didn’t want to sit on the sidelines and miss out on all the fun.

I knew the most logical solution was good old fashion Dramamine. But, I also know that Dramamine turns me into a cast member from The Walking Dead (not one of the alive ones, either). After an hour, I’d be face down, snoring in my Butterbeer.

So, I got to work researching cures for this common ailment.

By the time we arrived at Universal Studios, I was equipped with three methods (OTC medication, acupressure, ginger) for preventing motion sickness; I used all three, every day.

Yes, overall, the remedies worked well.  I enjoyed myself and didn’t embarrass my kids, so that’s a victory no matter how you look at it.

Since that trip, I’ve found a few more solutions for motion sickness, and I look forward to trying them ALL when we visit Universal Studios this spring.

Have fun!  As always, contact your doctor for the best advice.

Prescription Patch:  Worn behind the ear, the medication blocks signals from the brain that controls nausea and vomiting. The patch should be applied four hours before you travel.

Acupressure wristbands: I bought the brand intended for morning sickness (because what’s worse than morning sickness – nothing!).  The bands put pressure on the inside of the wrist area stimulating the acupressure point and decreasing nausea.

Food and drink: Stay hydrated (as far as I’m concerned, it’s the cure for most things) and eat something a few hours before the activity. Seriously, an empty stomach makes it worse.

Over the counter medications: Ask your doctor for suggestions, but I’ve found Bonine and Dramamine to work (although Dramamine works because I’m asleep).

Ginger:  Drops, gum, beer (which is just soda), or fresh ginger works to help ease queasiness, plus it tastes good.

Anchor Nutrition Bars: Developed by a leading gastroenterologist, the product claims to be all-natural and helps remedy nausea without drowsiness or side effects.

Wearable technology: Many companies make electronic devices to send signals from the wrist or neck to the body’s central nervous system. The signals control the neural pathways between the brain in the stomach, so bottom line, you don’t get sick.

Close your eyes: OK, OK, I know this one is common sense, but it’s worth mentioning. The Forbidden Journey in WWoHP is highly nauseating (the 2,000 warning signs don’t lie) because of the simulated motion (a ride on a broomstick). Close your eyes when it gets to be too much. Yes, you miss the ride, but it beats the alternative.